Vishalgad fort, is also called ‘Khelna’ or ‘Khilna’ by locals, and was one of the important forts of the Maratha empire. The name ‘Vishalgad’ means grand fort in Marathi, the name was given by Chhatrapati Shivaji Maharaj after annexing it during 1659. The structure covers an area of 1130 m and was built on a hilltop in the Sahyadri mountain ranges at a height of 3500 feet above sea level, and is about 76 km north – west of Kolhapur. 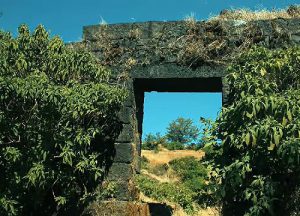 Vishalgad Fort was built in the year 1058 by a Shilahara ruler ‘Marsinh’ and was initially known as ‘Khilgil’ fort. But down the centuries it passed into the hands of many rulers who ruled around the Deccan region. When the fort was under the control of Adilshah , Shivaji wanted to capture the fort but the terrain of the fort was difficult and conquering appeared a herculean task. Shivaji attacked the fort several times, but the Adilshahi regiment were defending the fort valiantly. So then, Shivaji came up with a strategy. Accordingly, a group of Maratha soldiers went up to the fort and convinced the Adilshahi killedar (commander) of the fort that they were not happy with the rule of Shivaji Maharaj and thus had come to serve the Adilshahi. The Maratha’s were successful with their plan and then on the following day, they revolted and caused total mayhem inside the fort. Simultaneously, Shivaji Maharaj attacked the fort from the outside and in no time conquered the fort. Shivaji then renamed the fort as ‘Vishalgad’.

A fort had existed at Vishalgad long before it became a jagir. The Maratha emperor Shivaji had escaped to it after being besieged at Panhala Fort in 1660 and in 1844 it was one of the forts of Kolhapur State that initiated a rebellion against a Brahmin regent called Daji Krishna Pandit who had been installed by the British to govern the state in 1843 at a time when the natural heir to the throne was underage. He took direction from a political agent of the East India Company and among their actions were reforms to the tax of land. These reforms caused much resentment and, despite Kolhapur having refrained from involvement in the previous Anglo-Maratha Wars, a revolt against the British began in 1844. The rebellion began with soldiers locking themselves into hill-forts such as those as Panhala and Vishalgad, and then spread to Kolhapur itself. 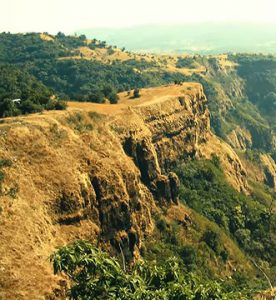 Shahu of Kolhapur attempted to undermine the Brahmin princelings of Vishalgad jagir, as also those of Bavda and Ichalkaranji, from around 1895. He had inherited the throne of Kolhapur in 1894 placed blame for the past weak government of his state on Brahmins, including those in its civil service, and claimed that there was justification for discriminating against them in order to improve the lot of his less privileged subjects. Aside from introducing policies of job reservation and education for the underprivileged in his state, he asked the British Raj provincial authorities of Bombay Presidency to allow a reduction in the privileges enjoyed by the feudatory chiefs, whom he claimed had been harbouring Brahmin terrorists from Poona. Historian Gordon Johnson says that “The case, although plausible, was not entirely convincing, and the matter dragged on into the 1920.

The fort was constructed by the Shilahara king ‘Marsinh’ in 1058 A.D. Initially, he named it as ‘Khilgil’.

In 1209, the then king of Seuna Yadavas of Devagiri defeated Shilaharas and captured the fort.

In 1309, Allauddin Khilji defeated King Ramchandra of the Seuna Yadavas of Devagiri and soon the fort was attached to the Khilji Dynasty.

In August 1347, the Mughal chief of the western India Hasan Gangu Bahamani became independent as a result of which the fort became a part of Bahamani Sultanat.

After the fall of the Vijayanagar Empire, it was captured by a local Maratha king Shankarrao More. Therefore, the Bahamani Sultan sent troops from Bidar under the Generalship of Mahmood Gawan, his then prime Minister, to re-capture it. Gawan’s officers Karnasinh Bhonsale and his son Bhimsinha captured the fort with the help of Ghorpad i.e. Giant monitor lizard. Thenceforth, Bhimsinha was conferred with the title Ghorpade.

In 1489, Yusuf Adil Shah separated himself from the Bahamani kingdom along with the area under his command and founded his independent sultanat at Bijapur. Hence, the fort was attached to Adil Shahi sultanate.

In 1659, Shivaji captured the fort with the help of the officers on the fort.

After Shivaji’s death, Chhatrapati Sambhaji would spend most of his times on the fort. He took initiative in renovation and reconstruction of some parts of the fortresses and gates of the fort.

In 1689, Rajaram Chhatrapati fled to Fort Gingee in Karnataka (now Tamil Nadu) from fort Panhala and thus ‘Vishalgad’ became an unofficial capital of the Maratha empire. Ramchandra Pant Amatya from Vishalgad and Rajaram Chhatrapati from Gingee made several moves and defeated Aurangzeb with the help of Santaji, Dhanaji, Parshurampant Pratinidhi and Shankaraji Narayan Sacheev.

During the times of Maratha Empire, Vishalgad was made capital of a large region consisting of ninety towns and villages in Kolhapur and Ratnagiri districts. Sardesai and Sarpotdar were officers on the fort since Adilshahi times. Some of the Havaldars (Military In Charge) on the fort during Rajaram Chhatrapati to Chhatrapati Shahu’s times were :
Trimbakji Ingawale – 3 years
Santaji Kathe – 9 years
Khandoji Karanjkar – 3 months
Umaji Gaikwad – 6 months
Shamji Rangnath Orpe Sarpotdar – 6 years
Vithoji Nimbalkar – 6 months
Malji Dalvi – 2 months

In 1844, as a result of mutiny by the Killedars, British army demolished the entire fort and dismissed the officers there.

The main doorway of Vishalgad has disappeared with time. There is “Mundha Darwaja” to the right side. There are temples of Amruteshwar & Shri Narsinha. There is a Samadhi built in the memory of Bajiprabhu Deshpande & Phulaji Deshpande. In the monsoon, heavy rainfall gives rise to many splashing waterfalls in this region.

Fort & dargah are well connected by public as private means of transport. You can reach here by ST buses, personal or hired vehicles. ST buses regularly ply from Kolhapur, Ratnagiri and Belgaon. The distance between Kolhapur and Vishalgad is about 81 kms.

Kolhapur is well connected to all major cities in the Maharashtra. Vishalgad is 76 kms away from Kolhapur so it is about 2-2.5 hours drive from Kolhapur city via Amba Ghat hill station.

Kolhapur is the nearest railway station to reach Vishalgad Fort & dargah. The distance between station & the fort is 81 kms. This railway station is connected to Pune, Mumbai, Nagpur & other major cities in the Maharashtra.

Ratnagiri Airport is the nearest airport to the fort. It is about 90 kms from the fort.

All year round. You can visit Vishalgad fort at any time of the year. In monsoon season, one can see amazing lush green surroundings and waterfalls at the fort. 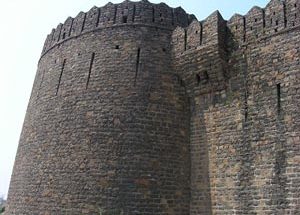