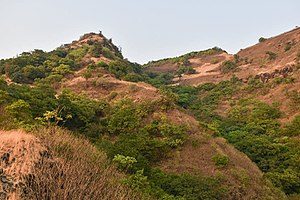 Located near Khed is one of the largest forts of Maharashtra with an area of 120 acres. Sumargad, Rasalgad and Mahipatgad are situated on a same spur 8 km long. Mahipatgad is on the northernmost end of the spur. Beldarwadi village located on the foot hill off Mahipatgad has 10 houses.

Mahipatgad Fort has a table land with six gateways which are in ruined state now and six battlements. Six gateways are called Laldevdi on north eastern side, Pusati on eastern side, Yeshwant on south eastern side, Khed still in use and connects Beldarwadi to Mahipatgad. Shiv Ganga on western side you can see rock cut Shivling near this entrance, Kotwal gateway leads to Kotwal village in Poladpur.

This fort was built by Adilshah of Bijapur in the 15th century. This fort was captured by King Shivaji in 1661. Later it passed to the Peshwas and finally to the British in 1818. There are 10 houses in the Beldarvadi village, which is at the foot hill of the fort. The villagers are said to have been brought by Shivaji as bricklayers for construction of the fort.

Steep cut walls of the mountain on which the fort has been built provide a good safety feature to this fort and due to this feature no fort walls have been built on its edges except where the ascend is likely and the safety could be jeopardized. At present these walls are in complete ruins.

The saddest part is all these doorways now stand in a dilapidated condition with only traces of it left. There is a Shivlinga near the Shivganga entrance, stairways near Pusati entrance and Lord Hanuman temple near the Kotwal entrance. There is a Lord Pareshwar temple on the fort which can be used for stay. There is a well opposite the temple with potable water in it.

The plateau of this fort is covered with forest and has many ruins of structures hidden in it which have to be studied thoroughly. Heaps of unused mortar could be seen on the fort which indicates that the development of this fort might have been left halfway.

Any time you can visit Mahipatgad.