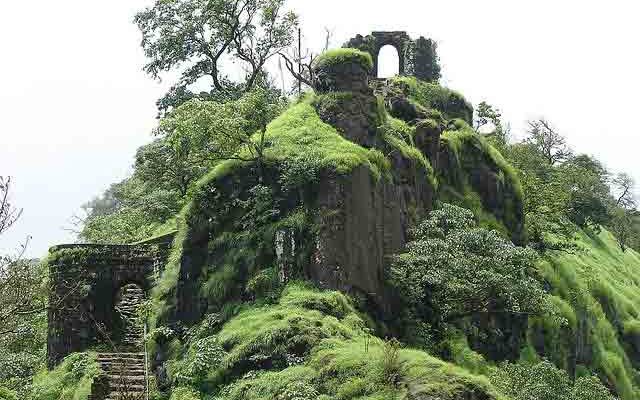 Located at a distance of about 140 km from the main city of Ratnagiri, Rasalgad Fort is nestled atop a triangular plateau and is a perfect weekend destination for trekkers. Surrounded by beautiful vegetation and blessed with a cool and pleasant weather, a trip to Rasalgad is a soothing and everlasting experience.

As per historical records, the fort was under the control of the Marathas in the 16th century. However, later on, it was captured by the Peshwas and then the British, who used it as an army post.

Today, the fort is under the care of the Archaeological Survey of India and has become a popular tourist attraction amongst local tourists and trekkers. There are also a few temples located within the fort complex.

The fort has been developed somewhere in ancient times. The known history of the fort starts from the time of Shivaji when it was first in the territory of More of Javli from whom Shivaji won this fort. Afterwards the fort changed hands from Peshawas to British in 1818.

From the top of the fort, you can see the robust Sahyadri ranges spread over long distances to the east, Palgad to the west, the Jagbudi River to the south and also the Madhumakarand fort. Tourists can go on to visit Sumargad and Mahipatgad from here.

The old main entrance is taken over by the newly built one. An idol of Hanuman can be seen on the way while crossing the steps through this northern door. The idol has dagger attached to its waist which is the sign of bravery and very rarely seen moustache on the lips of the statue.

Behind the Jholai temple, there are two British-made canons on the fort. The area of the Jholai temple is very beautiful. The idols of Jholaidevi, Shiva-Parvati, Bhairav, and Navachandi are situated in the temple. The temple is from the Peshwa era and a celebration takes place here once in every two years. There are magnificent lamp towers i.e. `Dipmala` in front of the temple and if you walk towards the east, you will find big tank pitches there. There is a canon placed near the tanks and the image of Shree Ganesha carved on the pillar. Looking at the carvings on the pillar it is believed that the tank was built way before the fort.

The village Rasalwadi is located at the foothill. It is well connected by road. It takes about 10 minutes to reach the fort from Rasalwadi. The temple on the fort is favourite amongst the trekkers for night halt. The journey to the Suamargad-Mahipatgad trek begins from the Rasalgad.

By Air :
Mumbai is nearest airport.
By Rail :
Khed is nearest railway station.
By Road :
Khed can be reached by direct ST buses from Mumbai, Pune and Kolhapur. While coming from Goa, one has to get down at Chiplun or Bharane Naka on the highway and then come to Khed. Khed is also connected by train to Mumbai and Goa. Catch ST bus from Khed to rasalgadwadi.

Rasalgad is a great option for those who like to travel in the rainy season. The rains contribute tremendously to the beauty of Rasalgad. When the fort is covered in mist, it creates a mysterious aura.