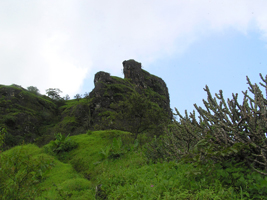 Mahuli Fort at 2815 ft, is a popular trekking destination and a paradise for rock climbers because of many nearby pinnacles with interesting names like Vazir, Vishnu, etc., given by the local trekking and climbing fraternity. This mountain complex is actually a group of two or more hills with common cols and pinnacles.

Besides an open Shiva temple there is a small perennial drinking water cistern on top, three caves of which the larger can be used as overnight shelter, like as on many other such natural hill forts of Maharashtra Western Ghats (Sahyadri Range). There is a stone arch historically known as the ‘Kalyan Darwaja’ but the dome of the arch is now broken.

The fort comes under jurisdiction of Tansa Wildlife Sanctuary. To enhance responsible ecotourism, recently ‘Mahuli Gad Eco Development Committee’ is formed under joint forest management regimes. This shall ensure ecosystem as well as livelihood issues of local people. the fort is also proposed to be restored through consulting ASI. The eco tourism and fort restoration plan prepare in 2015 by SDFO Saipun Shaikh, and approved by Nagpur Forest HQ. The further followup required to improve eco tourism and fort restoration.

The creator of this fort are Mughals. In 1485 this place came under rule Nijamshahi dynasty. When Shahaji Raje became the secretary of Nijamshahi, Mughals of Delhi tried to end Nijamshahi. In 1635-36, Shahaji Raje transferred himself with Jijabai and Chatrapati Shivaji Maharaj to Mahuli. When Khan Jaman attacked the fort, Shahaji asked Portuguese for help, who refused and Shahaji surrendered.

Shivaji Maharaj took this fort from Mughals on 8 Jan 1658. In 1661 it was given back and was won again by Chatrapati Shivaji Maharaj. In treaty of Purandar, in 1665, Marathas lost these forts again. In Feb 1670, Chatrapati Shivaji Maharaj tried to conquer Mahuli, but failed, Manohardas Gaud, was the in charge of the fort. A thousand Marathas were killed. Most of them were from nearby villages. Chatrapati Shivaji Maharaj said to his dead kadam sardar he is our gold. So maharaj gave the Sonare surname to this family. Manohardas Gaud, soon gave up his position and Alveerdi Beg took over. On 16 June 1670, after two months, Moropant Pingle conquered the forts and Mahuli, Bhandargad and Palasgad became part of Swarajya. Till 1817, Shivaji’s dynasty owned the fort but later on it was controlled by the British Raj.

A large number of trekkers, rock-climbers, and adventure lovers gives a visit to this fort throughout the year. A temple in the base village is the starting point of the trek.  Things to See Mahuli Fort:-

Open Shivling
Three caves of which the larger can be used as overnight stay.
There is a stone arch historically known as the ‘Kalyan Darwaja’. The dome of the arch is now broken.
“Namazgir” – a place of worship for the Muslims.
Old ruins of house and stables can be seen.
A beautiful view to Tansa lake.
Kalyan Darwaja – rock climbing technique will be required here.
A tank here holds water throughout the year.

Asangaon is on Mumbai-Nashik highway (91) km from Mumbai. 5 km inside on to the left is the Mahuli village. The nearest railway station to Mahuli is Asangaon. One can catch either the Asangaon or Kasara Local from Mumbai CST, which could also be caught at Kalyan or Thane Junction.

The best time visit Mahuli Fort is during spring, monsoon and winter.