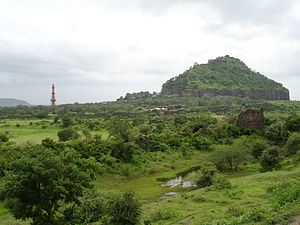 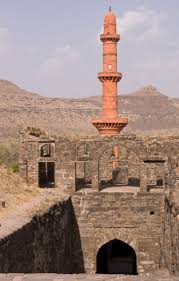 Daulatabad, also known as Devagiri, is a 14th-century fort city in Maharashtra state of India, about 16 kilometres (9.9 mi) northwest of Aurangabad. The place was originally named Devagiri when it was an important uplands city along caravan routes (ca. sixth century AD), but the intervening centuries have reduced it to a village. However it is also considered to be one of the seven wonders of Maharashtra and a developing tourist spot

Starting 1327, it famously remained the capital of Tughlaq dynasty, under Muhammad bin Tughluq (r. 1325-1351), who also changed its name, and forcibly moved the entire population of Delhi for two years before it was abandoned for lack of water and Tughluq was constantly known to shift the capital from Delhi to Daulatabad and Daulatabad to Delhi 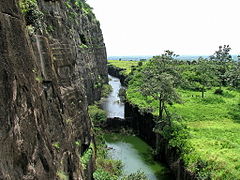 There is a belief that Devagiri was built in 1203 AD by a Dhangar or herdsman who acquired vast wealth by his good fortune. He had a brother who was a shepherd named ‘Raja Ram’ and in correlation with it he assumed the rank of a Raja (King). Lord Shiva is believed to have been stayed on the hills surrounding this region. Hence the fort was originally known as Devagiri, literally (Hills of Gods). 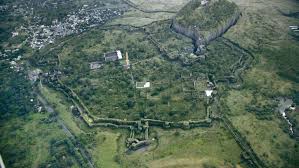 The area of the city the hill-fortress of Devagiri (sometimes Latinised to Deogiri). It stands on a conical hill, about 200 meters high. Much of the lower slopes of the hill has been cut away by Yadava dynasty rulers to leave 50 meter vertical sides to improve defenses. The fort is a place of extraordinary strength. The only means of access to the summit is by a narrow bridge, with passage for not more than two people abreast, and a long gallery, excavated in the rock, which has for the most part a very gradual upward slope.

About midway along this gallery, the access gallery has steep stairs, the top of which is covered by a grating destined in time of war to form the hearth of a huge fire kept burning by the garrison above.At the summit, and at intervals on the slope, are specimens of massive old cannon facing out over the surrounding countryside. Also at the mid way, there is a cave entrance meant to confuse the enemies.

The fort had the following specialties which are listed along with their advantages : 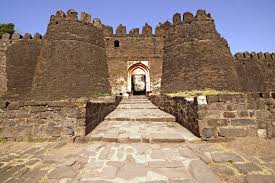 The site had been occupied since at least 100 BCE, and now has remains of Hindu & Buddhist temples similar to those at Ajanta and Ellora.

The city is said to have been founded c. 1187 by Bhillama V, a Yadava prince who renounced his allegiance to the Chalukyas and established the power of the Yadava dynasty in the west. During the rule of the Yadava king Ramachandra, Alauddin Khalji of Delhi Sultanate raided Devagiri in 1296, forcing the Yadavas to pay a hefty tribute. When the tribute payments stopped, Alauddin sent a second expedition to Devagiri in 1308, forcing Ramachandra to become his vassal.

In 1328, Muhammad bin Tughluq of Delhi Sultanate transferred the capital of his kingdom to Devagiri, and renamed it Daulatabad. Some scholars ague that the idea behind transferring the capital was rational, because it lay more or less in the center of the kingdom, and geographically secured the capital from the north-west frontier attacks. 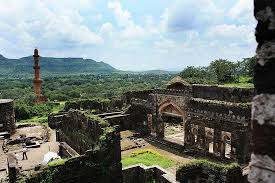 In the Daulatabad fort, he found the area arid & dry. Hence he built a huge reservoir for water storage & connected it with a far-away river. He used siphon system to fill up the reservoir. However, his capital-shift strategy failed miserably due to lack of application & other factors. Hence he shifted back to Delhi & earned him the moniker “Mad King”.

The next important event in the Daulatabad fort time-line was the construction of the Chand Minar by the Bahmani ruler Hasan Gangu Bahmani, also known as Ala-ud-Din Bahman Shah (r. 3 August 1347 – 11 February 1358).

Hasan Gangu built the Chand Minar as a replica of the Qutb Minar of Delhi, of which he was a great fan of. He employed Iranian architects to built the Minar who used Lapis Lazuli & Red Ochre for coloring. Currently, the Minar is out of bounds for the tourists, because of a suicide case.

As we move further into the fort, we can see the Chini Mahal, a VIP prison built by Aurangzeb. In this prison, he kept Abul Hasan Tana Shah of the Qutb Shahi Dynasty of Hyderabad. The antecedents of Abul Hasan Tana Shah, the last Qutub Shahi king are shrouded in mystery. Although a kinsman of the Golconda royals, he spent his formative years as a disciple of renowned Sufi saint Shah Raju Qattal, leading a spartan existence away from the pomp and grandeur of royalty. Shah Raziuddin Hussaini, popularly known as Shah Raju, was held in high esteem by both the nobility and commoners of Hyderabad. Abdullah Qutub Shah, the seventh king of Golconda was among his most ardent devotees. He died in prison leaving no male heir to the throne.

In this Chini Mahal, Sambhaji Maharaj, son of  Great Shivaji Maharaj was kept.

Most of the present-day fortification was constructed under the Bahmanis and the Nizam Shahs of Ahmadnagar. The Mughal Governor of the Deccan under Shah Jahan, captured the fortress in 1632 and imprisoned the Nizam Shahi prince Husain Shah 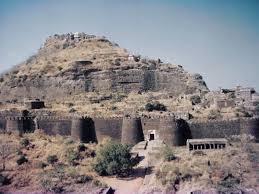 The outer wall, 2.75 miles (4.43 km) in circumference, once enclosed the ancient city of Devagiri and between this and the base of the upper fort are three lines of defenses.

Along with the fortifications, Devagiri contains several notable monuments, of which the chief are the Chand Minar and the Chini Mahal The Chand Minar is a tower 210 ft (64 m). high and 70 ft (21 m). in circumference at the base, and was originally covered with beautiful Persian glazed tiles. It was erected in 1445 by Ala-ud-din Bahmani to commemorate his capture of the fort. The Chini Mahal (literally: China Palace), is the ruin of a building once of great beauty. In it Abul Hasan Tana Shah, the last of the Qutb Shahi kings of Golconda, was imprisoned by Aurangzeb in 1687.

By Road :- Devagiri is in the outskirts of Aurangabad, and is on the Aurangabad – Ellora road (National Highway 2003). Aurangabad is well connected by road and 20 km away from Devagiri.

The Devagiri Express regularly operates between  Mumbai  and  Secunderabad via Aurangabad, Maharashtra.

During October to February the temperature is low, makes travelling across the fort easy and hassle free.

During June to September the season is rainy which is also not a bad season to travel across the town as the weather is pleasant. 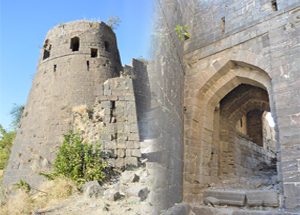