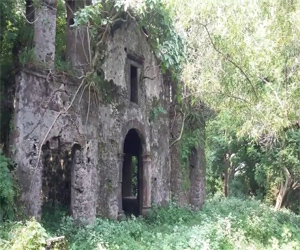 The Dronagiri fort is a small hill fort, is located near Uran in Raigad district of Maharashtra. It lies near Karanja. This fort was built in olden days and was captured by the Portuguese during their rule. There is a church on top of the fort. Being close to Uran and Karanja, the fort was strategic importance since old times. The entire hill is densely covered with forest.

Dronagiri fort is very old fort believed as old as Elephanta or Gharapuri caves. Established during Chalukya Royal family’s ruling across Maharashtra exactly 2000 years back. In 1530 the fort was repaired by the Portuguese. In 1535 the father Antono-de-porto constructed three churches Nosa senhora, N.S.Da Penha and Sam Francisco. In 16th century the fort was captured by Adilshah and was in his control for some period. Finally it passed to the hand of British. On 10 March 1739 the fort was captured by Manaji Angre along with the Uran fort. 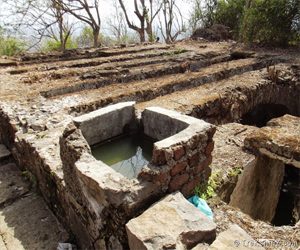 The ruins of the fortification are seen on the fort. There is a church Nossa Senhora da Penha in good condition, but without any idol or inscription. There are two water tanks “Gagoni and Gijoni” near the church.

The church is in the inner fortification. The main gate to the fort is situated on the south of the church 50 m away. The arch of the gate is broken, yet the guards rooms are in good condition.

The Ganpati carved on the key stone is placed in one of the guard room. From the main gate a path way leads south to the Village Karanja. In between a Vetal mandir in ruined state is located.

The pathway starting from the back of the Vetal mandie leads to large water tank in good condition situated among the forest. The path to the Dronagiri fort starts from the Uran Bus stand. The narrow road in front of the Bus stand leads to Daur Nagar. After passing through the tribal hutments in Daur nagar a lone path leads to the fort. The path is a gradually climbing northern detour around the hill. The entire path passes through dense forest of Gliricidia sepium or Mexican Lilac trees planted by Forest department. There is a Police Chowki near the Church on the fort. Night halt on the fort is restricted.

Permission is needed to enter explore fort due to ONGC plan based as CISF is looking after this fort and have camp on it. Two watch guards always present on fort. Best season to visit Dronagiri Fort is from November to March.