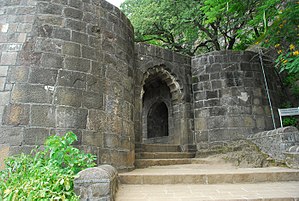 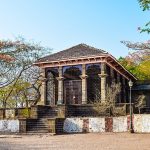 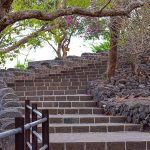 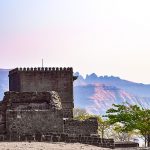 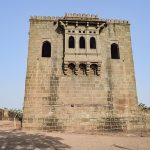 Shivneri Fort is a 17th-century military fortification located near Junnar in Pune district in Maharashtra, India. It is the birthplace of Chhatrapati Shivaji Maharaj, the founder of Maratha Empire.

Shivneri is known to be a place of Buddhist dominion from the 1st century AD. The caves, rock-cut architecture and water system indicate presence of habitation from the 1st century. Shivneri got its name as it was under the possession of the Yadavas of Devagiri. This fort was mainly used to guard the old trading route from Desh to the port city of Kalyan. The place passed on to the Bahmani Sultanate after the weakening of Delhi Sultanate during the 15th century and it then passed on to the Ahmadnagar Sultanate in the 16th century. In 1595, a Maratha chief named Maloji Bhonsle, the grandfather of Chhatrapati Shivaji Bhosale, was enabled by the Ahmadnagar Sultan, Bahadur Nizam Shah II and he gave him Shivneri and Chakan. Chhatrapati Shivaji Bhonsale was born at the fort on 19 February 1630 (some accounts place it 1627), and spent his childhood there. Inside the fort is a small temple dedicated to the goddess Shivai Devi, after whom Chhatrapati Shivaji Bhonsale was named. The English traveller Fraze visited the fort in 1673 and found it invincible. According to his accounts the fort was well-stocked to feed thousand families for seven years. He also made a mention that the fort was then governed by a Brahmin turned Muslim. The fort was under the control of the Mughals after the Marathas and Shahu demanded it back in 1716. They regained the fort in 1762 and became a part of Ragunatha Rao. The fort came under the control of the British Rule in 1820 after the Third Anglo-Maratha War.

Shivneri is a hill fort having a triangular shape and has its entrance from the South-west side of the hill. Apart from the main gate there is an entrance to the fort from side called locally as the chain gate, where in one has to hold chains to climb up to the fort gate. The fort extends up to 1 mi (1.6 km) with seven spiral well-defended gates. There are mud walls all around the fort. Inside the fort, the major buildings are the prayer hall, a tomb and a mosque. There is an overhanging where executions took place. There are many gates structures protecting this fort. Mana Daravaja is one of the many gates of the fort.

There are statues of Jijabai and young Chhatrapati Shivaji Maharaj inside the fort. At the centre of the fort is a water pond which is called ‘Badami Talav’. To the South of ‘Badami Talav’ are the statues Jijabai and a young Shivaji Maharaj. In the fort there are two water springs, called Ganges and Yamuna, which have water throughout the year. Two kilometers away from this fort there are the Lenyadri caves which is one of Ashtavinayak temple in Maharashtra. It has been declared as a protected monument.

The nearest town Junnar is a taluka place and is well connected by road. Junnar is about 90 km from Pune. The fort is at about 2-3 km from the junnar town. It is easy to reach the fort top via main entrance, however the trekkers with proper climbing equipment can try the chain route which is located on the western scarp of the fort. From the top of the fort, Narayangad, Hadsar, Chavand and Nimgiri forts can easily be seen.

Best time to visit Shivneri Fort is during Monsoon.