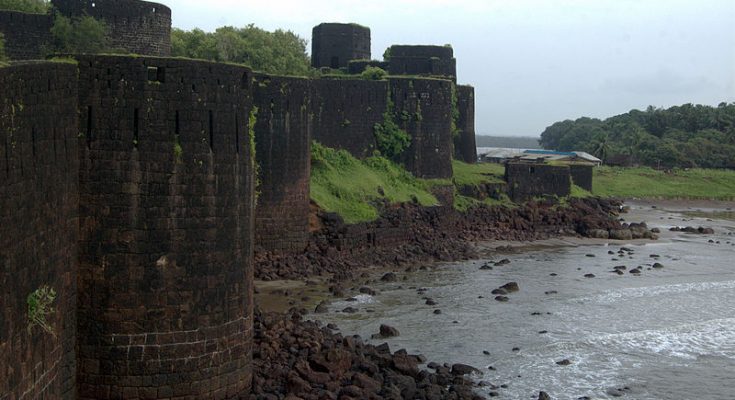 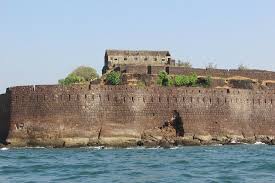 Vijaydurg (sometimes written as Viziadurg), the oldest fort on the Sindhudurg coast, was constructed duringthe regime of Raja Bhoja II of the Shilahar dynasty (construction period 1193-1205) and restructured by Shivaji Maharaj.

Earlier, the fort encompassed an area of 5 acres (1 acre = 4840 square yards or 4047 square metres) and was surrounded by sea on all four sides. Over the years the eastern trench was reclaimed and a road constructed thereon. Presently the area of fort is about 17 acres and is surrounded by the Arabian Sea on three sides. Shivaji Maharaj extended the area of the fort by constructing three walls on the eastern side, each 36 metres high. He also constructed 20 bastions.

According to legend, this is one of only two Maratha forts where Shivaji Maharaj personally hoisted the saffron flag. The other fort is Torna.

Vijaydurg Fort was called the “Eastern Gibraltar”, as it was virtually impregnable. Its locational advantages include the 40 km long Waghotan/Kharepatan creek. Large vessels cannot enter the shallow water of this creek. Also, Maratha warships could be anchored in this creek and yet remain invisible from the sea. It is a protected monument. Vijaydurg fort is located at the tip of the peninsular region of Vijaydurg in Devgad Taluka, of district Sindhudurg. It is one of the several coastal forts on the western coast of Maharashtra, India. It is surrounded by water on all the four side but connected to land through a narrow road. The port adjacent to the fort is a natural port and is still used by local fishermen. 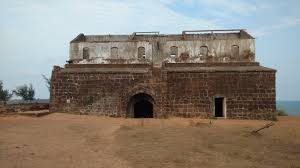 In 1653 Shivaji Maharaj had captured this fort from Adil Shah of Bijapur and renamed it as “VijayDurg”. The original name of the fort was “Gheria” and the first fortification appears to have been constructed in 1200 during the regime of Raja Bhoj II. Shivaji Maharaj developed Vijaydurg as an important base for Maratha warships.

Maratha Empire looked to be in a decline after death of Shivaji Maharaj In 1680, when his son and successor Chhatrapati Sambhaji was captured by Mughal Emperor Aurangzeb and brutally tortured to death on 21 March 1689. Later in that year the fort of Raigad fell in the hand of Mughals. Wife of Shambhaji and his infant son Shahu along with many others were captured and were treated as state prisoners.[

Shivaji Maharaj’s second wife’s son Raja Ram then took in charge of the Maratha Empire. Inspired by the valiant death of Shambhaji, they fought back against the Mughals. It was during his reign Kanhoji Angre alias Conajee Angria became Koli admiral of naval army of the Marathas. In 1698, Kanhoji made Vijaydurg the capital of his territory along the coast. 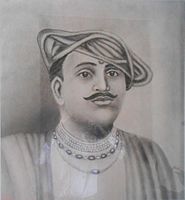 In 1700 Raja Ram died. Tara Bai,the brave widow of Raja Ram took over the control of Maratha Empire. Putting her infant son on Maratha throne styled as “Shivaji II”, Tara Bai led successful operations against the Mughal from 1700 to 1707. Taking advantage of discomfiture of Shivaji Maharaj’s ruling house Kanhoji Angre became the most “Powerful and independent Naval Chief of West coast of India”. Tarabai gave Kanhoji title of Sarkhel (Admiral). At one time Kanhoji Angre was master of the whole coast from Bombay (Now Mumbai) to Vengurla.

Aurangzeb died in 1707 and Shahu was released from the clutches of Mughals. He challenged Tarabai and her son’s legitimacy to the Maratha throne. The Marathas were divided but ultimately Shahu won the right to the throne as Chhatrapati and Tarabai was retreated to rule a small area of Kolhapur under the name of his son Shivaji II in 1713. She was later overthrown and imprisoned till her death by her husband’s second wife Rajas Bai.

In the same year, Shahuji sent his Peshwa (Prime Minister), Balaji Vishvanath from his headquarters at Satara to negotiate with Kanhoji Angre. Kanhoji agreed to acknowledge allegiance to Satara and shift his loyalty from Tarabai. In return Kanhoji was confirmed command of the Maratha fleet, and granted twenty-six forts and fortified places with their dependent villages.

Vijaydurg is said to be the oldest fort in Sindhudurg coast. In the Pre-Independence era it was also known as “Eastern Gibraltar”. This is because the fort was almost unconquerable. Under the leadership of Kanhoji Angre, it withstood many naval attacks by the British and the Dutch. Kanhoji Angre died on 4 July 1729 and the Angres control of the fort ended in 1756 after the Peshwa-British Alliance defeated the Angres clan. In 1818 Vijaydurg was completely in the hand of the British Empire. 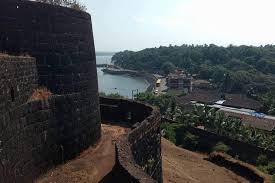 After the death of Kanhoji Angre, there were two short reigns by Sarfoji and Sambhaji. The two brothers Manaji and Tulaji started fighting for the Angre throne. Nanasaheb Peshwe had intervened in the disputes between Manaji and Tulaji. This created two spheres of influence, Manaji in the north at Kulaba and Tulaji in the south at Vijaydurg. Tulaji Angre was favored by Chhatrapati Shahu and was appointed as Sarkhel (Admiral) of the Maratha Navy. This was against the will of Nanasaheb Peshwa.

Tulaji was brave and a much more skillful seaman than Manaji. This had gained him the favor of Chhatrapati Shahu. In a brief span, he had surpassed the record of his predecessors in the number of English ships captured: Charlotte of Madras, William of Bombay, Svern of Bengal and, Darby, Restoration, Pilot, Augusta and Dadabhoi of Surat. He had also captured Anjanvel from the Siddis of Janjira. Another reason for the Peshwa to go against Tulaji was that, Tulaji refused to admit the Peshwa as his superior, maintaining that both were equal servants of the Chhatrapati. He refused to pay revenue contribution and even annoyed the Peshwa by raiding his territory. Nanasaheb could do nothing as long as Shahu was alive, but after his death in 1749, Peshwa was free to wreck his vengeance on Tulaji. 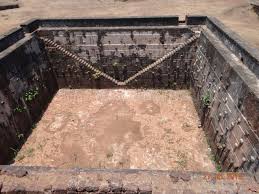 Death of Chhatrapati and rise of Peshwa:

After the death of Chhatrapati Shahu, Peshwa was the next most influential ruler among the ones with huge armies and numerous land forts under his command or at his disposal under ownership of his vassals. Nanasaheb sought assistance of the English at Bombay to end Tulaji’s reign. A treaty was signed according to which a ground force under command of the Peshwa and a naval force under command of the Company would attack and destroy Tulaji. Among other articles, the treaty provided that Fort Vijaydurg, when captured, would be given to the Peshwa.

In 1755, Commodore James of Bombay attacked the fort Suvarnadurg while the Peshwa’s army started capturing land and other coastal forts of Angre. This isolated Suvarnadurg from landward. Commodore James first bombarded the fort from the west. 800 shots and shells were expended at a range of 100 yards, but the walls did not collapse. He then entered the channel between the fort and the coast and fired on the eastern face as well as the main gate. Both gave way. Some garrison tried to escape from the fort by a tunnel running into the sea, but were discovered and killed. Considerable damage had been caused inside the fort by the bombardment and the garrison, finding no hope of relief or reinforcements, surrendered. Commodore James returned to Bombay for the monsoons.

After the fall of Suvarnadurg and all other forts of the Angre, Vijaydurg was the only fort left under the command of Tulaji. In 1756, a large force under Admiral Watson converged on Vijaydurg. Watson had arrived at Bombay from eastern waters and had with him Colonel Clive with 500 marines. The English ships took station with Watson flying his flag on the Protector. Two bomb vessels were in the extreme east. The Maratha ships were anchored at the mouth of the creek, close to the fort. They all were bunched up, almost hull to hull. Amongst these was the Company’s ship Restoration, which caught fire. The fire spread rapidly till the entire Angre fleet was destroyed, The bombardment of the fort had caused considerable damage inside the fort and magazine had been blown up. 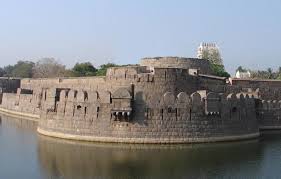 Tulaji, meanwhile had left the fort and gone to the Peshwa’s camp seeking a negotiation but was promptly arrested and sent to one of the inland forts as a prisoner. The garrison was asked to surrender and in the absence of any response Clive landed his marines on 11 February 1756, entered and captured the fort. A huge amount of booty was captured. 250 pieces of cannons, stores and ammunition, 100,000 Rupees and 30,000 in valuable items fell into English hands. Vijaydurg was not handed over immediately to the Peshwa as per the terms of the treaty. It was eventually given up but only after the Company obtained Bankot in exchange.

The battle of Vijaydurg marks the end of the Maratha Navy as a potent force. The Maratha Admiral Dhulap captured some ships later. The Sawants of Sawantwadi, the Chhatrapati of Kolhapur and the Gaikwads of Baroda, all had a few ships. But the command of the seas, for all practical purposes had passed to the Company permanently. they achieved this in 1756 only because of the alliance with the Peshwa.

The fort is an architectural genius because of the manner in which Shivaji took advantage of its location. The Kharpetan creek linked to this fort makes entrance of large ships and vessels into the vicinity practically impossible. This area was used to harbour the warships of the Maratha clan. This fort hence earned the name of the ‘Eastern Gibraltor’.

There is also a platform that was constructed in the Arabian sea for the purpose of guarding – another marvel worth checking out. The naval dock is one place where the Maratha warships were repaired. It went by the name Wagjotan Creek, placed about a kilometre and a half away from the fort. This is interestingly the one of the few two forts where Shivaji embarked the saffron flag. The fort has many monuments, now in ruins which show the characteristics of Maratha architecture. The food storage and court are such classic examples. This fort also has a Khalbatkhana, where important meetings were held.

Vijaydurg is easily accessible from all parts of Maharashtra, and even outside it. If you are travelling by air, Panaji comes as the closest airport, where from you can set upon a short journey by hiring a cab. If travelling by train, one can get down at either of the two stations of Kudal and Rajapur. Vijaydurg is well attached by road to all the major cities like Pune, Mumbai and many more by means of buses that are state owned or private.

Best time to visit Vijaydurg Fort is in winter, as the temperature is cool and soothing.