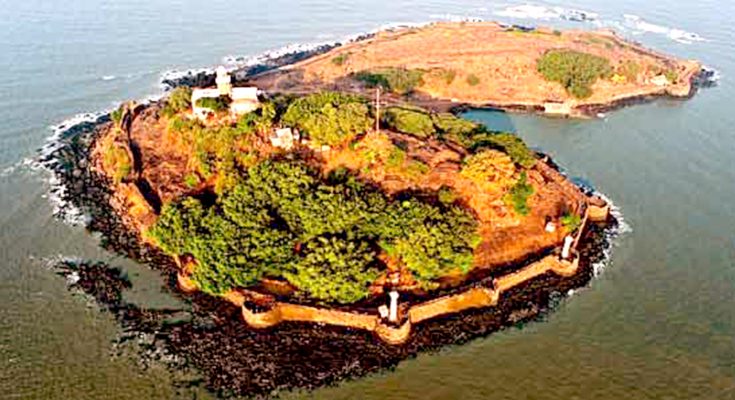 Official name of Khanderi Fort is Kanhoji Angre Island. Khanderi and Underi are the forts built on two Islands near Thal, very near to Alibaug. This fort is located 5 km off the coast of Maharashtra (off Thal, Kihim) and 20 km south of Mumbai. Khanderi, along with its sister fort Underi (Jaidurg) formed the major fortification along the Maharashtra coast, the former falling under Shivaji’s control and the latter under his opponents, the Siddis.

The forts still stand proud in the Arabian Sea as they stood against the British and the Siddi in 17th century, and their walls are still intact.

Underi (also called Jaidurg) is a fortified island near the mouth of Mumbai harbour south of Prong’s Lighthouse. It is a companion fort to Khanderi and currently lies in Raigad district, Maharashtra. These islands of Khanderi and Underi served as one of the landmarks for ships entering Mumbai harbour. Underi is smaller than Khanderi. 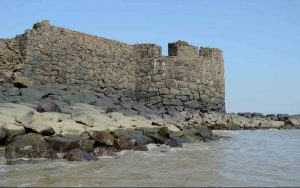 Initially, the islands of Underi and Khanderi were uninhabited. Most of the fort is still intact, with the most prominent structure being a lighthouse built by the British in June 1867 and the two storey building upon which the lighthouse is located. The lighthouse is 22 feet high and can be seen from up to 13 km away.

The fort is a restricted area, which falls under the jurisdiction of the Indian navy. 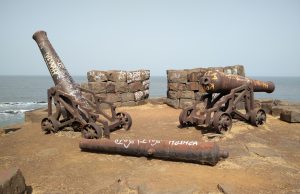 Additionally, the fort has a few old metal canons, the tomb of Daud Pir, a local saint and a musical stone that emits metallic musical notes when struck. There is a one secret way for going on the Kulaba fort of Alibag.

In 1679, Khanderi was occupied by the forces of Shivaji, who oversaw the building of the fortifying walls. Subsequently, Khanderi fort was built during the reign of the Maratha king Shivaji in 1660 CE to keep a check on the Siddis at Murud-Janjira fort and was the site of many battles between Shivaji’s forces and the navy of Sidi. It contained two wells to supply water to the forces within, and a temple of Sri Betal. 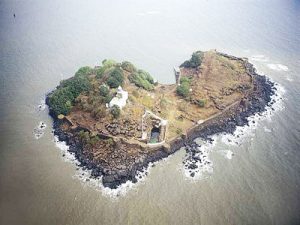 Shivaji Maharaj selected the island of Khanderi to fortify it to keep a check on the British trade route to Mumbai and northward ports. He tried building the fort in 1672, but the British were sceptical and tried to siege the fort. The Marathas retreated, only to return back in 1679. Under the leadership of Maynak Bhandari, 150 men were garrisoned on Khanderi to complete the fortification. The English warned the Marathas, who did not pay heed to them. The Marathas continued their work without hindrance. The British then deputed their warships to block the supplies to the Marathas and stop their work.

The Marathas till then had improvised a lot in their naval strategy, and deployed shallow vessels that could travel in low tide. Daulat Khan, another brave naval officer of Shivaji, defended the British from Khubladha fort of Thal and dispatched the supplies in the small boats during low tide, when huge British ships could not sail. Finally, Khanderi was completed and the British signed a truce with Marathas in 1680.

On 8th March 1701, Siddi Yakut Khan attacked Khanderi, but had to retreat. In 1718, the British attacked this fort with a big fleet of warships. Mankoji Suryavanshi defended the fort with 500 men for almost a month, due to which the British had to retreat back. In 1814, the Peshwas took over the fort from Angres, who got it back in 1817. It went into the hands of the British in 1818.

To the right side of the jetty is a wooden temple, where a huge stone is worshipped as Vetala or the spirit. There is a festival each year during Holi when pilgrims gather here for worship.

2. The ramparts and the canons with cart wheels:-

There are around 16 bastions on the fort. Since the fort was under the custody of Mumbai Port Trust since the British rule, a lighthouse was built here and a helipad is also installed. Below the helipad there is a small door in the walls which takes us outside on the beach, from where we can have a good look of the fort walls.

The lighthouse was built in 1867 and is functional since then. It is about 25 m high, and a good place to have view of the fort completely and the surrounding area.

On the right side of the Jetty there is a amazing rock. When struck with another stone, it creates a noise like a metal vessel.

By Air :
Mumbai is a nearest airport.

By Rail :
Pen is a nearest railway station.

By Road :
Thal town is located at about 8 km north of Alibaug, and the diversion to Thal is 4 km away from Alibaug on Alibaug Revas road. ST buses ply regularly between Alibaug and Thal.

Khanderi is located bit far from the beach, and can be visited irrespective of high or low tide as it has a jetty. Since Underi has no jetty, one can visit it only during low tide.