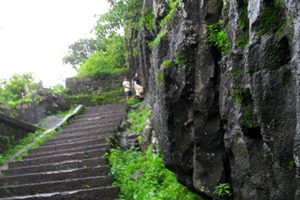 It is a 16th-century fort that was called “Ajimtara” during Aurangzeb regime and was based on Aurangzeb son’s name, Ajim. Marathi novelist Narayan Hari Apte named the fort “Ajinkyatara”, when he wrote his first novel on the same name, first published in 1909. Now it also holds the television tower for the city of Satara. This fort has been the place where several pivotal moments in Maratha history took place.

Viewing the Ajinkyatara Fort from far Yawateshwar hill too is so nice. Main attractions of this place are hiking, trekking and mountaineering. For the best view, one must start breasting up the hill from the base of Ajinkyatara at around 3.30 pm.

The fort of Satara (Ajinkyatara) is the fourth capital of Maratha. First Rajgad and Raigad, Jinji and the 4th Ajinkyatara. The fort of Satara is the Shilahar dynasty of Bhoj (II) built in 1190. Later this fort was controlled by Bahamanis and thereafter by Adilshah of Bijapur. In 1580, the first Adilshah’s wife Chandbibi was imprisoned at this fort. Bajaji Nimbalkar was also imprisoned in this place.

In 1699, Aurangzeb set siege to the fort in Satara. At that time, the fortress of the fort was Prayagji Prabhu. On the morning of April 13, 1700, when the Mughals used to make two tunnels and lights for tunneling, the Mars Bastion was thrown into the sky in a moment. Some of the Marathas on the coast collapsed. Prayagji Prabhu was also found in the blast, but did not read anything without harm. In the same time, the second explosion occurred and a big shore collapsed on the Mughals who were going forward and 150 thousand Mughal soldiers were killed. Afterwards, all the granulation & ammunition of the fort ended and on 21st April and Subhanji won the fort. It took a little over four and a half months for the Mughals to capture the fort and thereafter the fort was named as “Azmatara”.

In 1708 Shahu Maharaj won this fort by treachery and then this was under the Maratha Empire till 1818. This was the place where Shahu Maharaj had imprisoned Tarabai. Earlier, Tarabai Raje Bhonsale had won this fort from the Mughals and renamed it to “Ajinkyatara”.

In 1719, Yeshubai (Mother of Shahu Maharaj) was brought to the fort. Later this fort was under the control of Peshawas’. After the death of Shahu II, the fort was seized by the British in 11th February 1818.

Below are the key places to see on the fort

Access to Ajinkyatara is possible by road (2 hours from Pune, 4 hours from Mumbai), train (the nearest station is Satara Road) or plane (nearest airport is Pune). 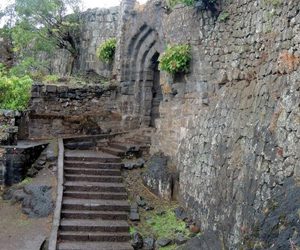 Visitors can also visit the temples of Devi Mangalai, Lord Shankar and Lord Hanuman on the northeast side of the fort. Nandgiri and Chandan-Vandan forts on the east and Jarandeshwar and Yawateshwar hills on the west can also be seen from the fort.

Satara is well connected by rail and road with Pune, Sangli, Miraj and Kolhapur.

The best time to visit would be winter. The trek of Ajinkyatara is of easy level and hence is recommended for novice trekkers.