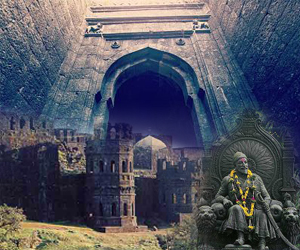 Raigad is a hill fort situated in the Mahad, Raigad district of Maharashtra, India. The Raigad Fort was seized by Great Chhatrapati Shivaji Maharaj and made it his capital in 1674 when he was crowned as the King of a Maratha Kingdom, “Swarajya” which later developed into the Maratha Empire, eventually covering much of western and central India.

The fort rises 820 metres (2,700 ft) above the sea level and is located in the Sahyadri mountain range. There are approximately 1737 steps leading to the fort. The Raigad Ropeway, an aerial tramway exists to reach the top of the fort in 10 minutes. The fort was looted and destroyed by Mughal Empire after the death of Chhatrapati Sambhaji Maharaj and later by the British after it was captured in 1818. The villages of Pachad and Raigadwadi are located at the base of the Raigad fort. These two villages were considered very important during the Maratha rule in Raigad. The actual climb to the top of the Raigad fort starts from Pachad. During Chhatrapati Shivaji’s rule, A cavalry of 10,000 was always kept on standby in Pachad village.

After capturing Rairi from Chandrarao More, Chatrapati Shivaji Maharaj also built another fort Lingana around 2 miles away from Raigad. The Lingana fort was used to keep prisoners. In 1689, Zulfikhar Khan captured Raigad and Aurangzeb renamed it as Islamgad. In 1707, Siddi Fathekan captured the fort and held it until 1733.

In 1765, The fort of Raigad along with Malwan in present Sindhudurg District, the southernmost district of Maharashtra, was the target of an armed expedition by the British East India Company, which considered it a piratical stronghold.

In 1818, the fort was bombarded and destroyed by cannons from the hill of Kalkai. And on 9 May 1818, as per the treaty, it was handed over to the British East India Company. The Raigad Fort was built by Chhatrapati Shivaji Maharaj, Maharashtra and the chief architect/engineer was Hiroji Indulkar. The main palace was constructed using wood, of which only the base pillars remain. The main fort ruins consist of the queen’s quarters, six chambers, with each chamber having its own private restroom. In addition, ruins of three watch towers can be seen directly in front of the palace grounds out of which only two remain as the third one was destroyed during a bombardment by British cannons. The Raigad Fort also has ruins of a market which was accessible to horseback riders. The fort also overlooks an artificial lake known as the Ganga Sagar Lake. The only main pathway to the fort passes through the “Maha Darwaja” (Huge Door). The Maha Darwaja has two huge bastions on both sides of the door which are approximately 65–70 feet in height. The top of the fort is 600 ft higher from the location of this door.

The fort has a famous wall called “Hirakani Buruj” (Hirkani Bastion) constructed over a huge steep cliff. The legend goes “that a woman by the name of Hirakani from a nearby village had come to sell milk to the people living at the fort. She happened to be inside the fort when the gates got closed and locked past sunset. Hearing the cries of her infant son back at the village echo after nightfall, The anxious mother couldn’t wait till dawn and courageously climbed down the steep cliff in pitch dark all due to the love for her little one. She later repeated this extraordinary feat in front of Shivaji Maharajand was bravely rewarded for it.” In appreciation of her courage and bravery, Shivaji Maharaj built the Hirkani Bastion over this cliff. Quickly after this Hiroji Indulkar made cliff more stiff to climb.

The King’s durbar inside the Raigad Fort has a replica of the original throne that faces the main doorway called the Nagarkhana Darwaja. This enclosure had been acoustically designed to aid hearing from the doorway to the throne. A secondary entrance, called the Mena Darwaja, was supposedly the private entrance for the royal ladies of the fort that lead to the queen’s quarters. The convoy of the king and the king himself used the Palkhi Darwaja. To the right of Palkhi Darwaja, is a row of three dark and deep chambers. Historians believe that these chambers were the granaries for the fort.

The Takmak Tok
From the fort, one can view the execution point called Takmak Tok, a cliff from which sentenced prisoners were thrown to their death. This area has been fenced off.

The statue of Chhatrapati Shivaji is erected in front of the ruins of the main market avenue that leads to the Jagdishwar Mandir and his own Samadhi and that of his loyal dog named Waghya. The Samadhi of Rajmata Jijabai Shahaji Bhosale, Chatrapati Shivaji’s mother, can be seen at base village of Pachad.

The main deity of the temple is Shri Jagadishwara.  Shivaji Maharaj who was an ardent follower Lord Shiva and of the Hindu religion was known to visit the temple daily whenever they were on Raigad. The temple  dome represents the Moghul architecture.

Additional famous attractions of the fort include the Khubladha Buruj, Nane Darwaja and the Hatti Talav (Elephant Lake).

You can reach to raigad fort by train. Veer and Mangaon are the nearest stations to Raigad Fort on the Konkan railway line (~40 Km and ~55 Km respectively from the fort). Raigad Fort is almost 200Kms from Mumbai by road through NH17.

There are approximately 1737 steps leading to the fort from Base. The Raigad Ropeway, an aerial tramway exists to reach the top of the fort in 10 minutes

The ideal time to visit the Raigad fort is during November to March as winters are not harsh here. The weather remains pleasant, and you will enjoy trekking or Ropeway the most during winters. Ropeway in monsoon is breathtaking as we go through clouds to reach to the top of fort.