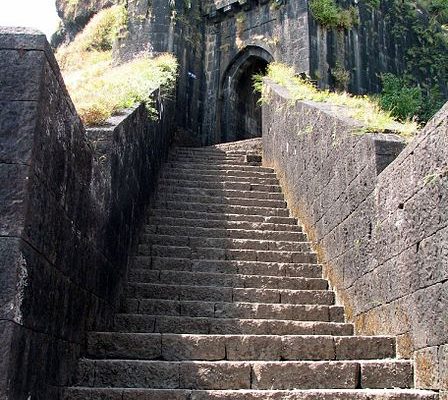 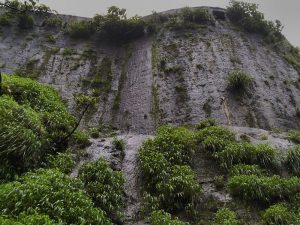 Lohagad (iron fort) is one of the many hill forts of Maharashtra state in India. Situated close to the hill station Lonavala and 52 km (32 mi) northwest of Pune, Lohagad rises to an elevation of 1,033 m (3,389 ft) above sea level. The fort is connected to the neighboring Visapur fort by a small range. Lohagad and Visapur Forts are situated atop an impressive hill near Malavali, 52 km away from Pune. These forts were built in the 18th century. A 1 km long ridge separates the two forts.

Lohagad, which is 3,400 feet high, is a very wide spread fort. Ganesh Darwaja, Narayan Darwaja, Hanuman Darwaja and Maha Darwaja are the four doors to Lohagad from the nearby village. A few sculptures are still visible on Maha Darwaja.

Visapur fort, which is 3,500 feet in height, is situated between Lohagad and Bedse Caves. A huge cannon of 10 feet in length feet is the main attraction of Visapur, as it has an impression of royal crown. 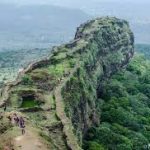 Vinchu Kata is the famous spot of Lohagad – which is a range of hills that looks like Capricorn. Pawana Dam can be viewed from the backside of Lohagad. Sinhagad fort, Tung fort and Tikona fort can be clearly seen from the Visapur fort. These two forts are historically very crucial and must be visited by trek lovers and history lovers.

Lohagad makes an ideal trekking destination for trekkers from Pune and Mumbai because of its accesibility, ease of the trek and lush green surroundings. There are stair all the way top top of Lohagad. So people with young children can go all the way to top easily. pavana dam can be seend from the top of it.

The fort was under the Maratha empire for the majority of time, with a short period of 5 years under the Mughal empire.

Lohagad is one of the strongest and most famous of Deccan forts and is probably a settlement of very great age.
Its position, commanding the high road to the Bor pass, must have always made it important,

1489:- In modern times it is mentioned as one of the Bahmani forts taken by Malik Ahmad when (1489) he established himself as an independent ruler.

1648 -1670:- Shivaji Maharaj captured it in 1648 AD, but he was forced to surrender it to the Mughals in 1665 AD by the Treaty of Purandar. Shivaji recaptured the fort in 1670 AD (the successful operations that followed Tanaji Malusre’s capture of Sinhgad, Lohagad was surprised by the Marathas) and afterwards used it for keeping his treasury. This fort was used to keep the loot from Surat.

1770:- the fort was taken in the interests of Nana Fadnavis by a Koli named Javji Bomble. This man who was a famous outlaw had some capital rocket-men and advancing one of them to a favourable position pointed out to him the direction he was to fire. One of the rockets fell among some powder close to the door of the magazine and caused such an explosion that the garrison were forced to surrender.

1796- 1800:- placed Dhondopant, a dependant of his own, in command of Lohagad and sent all his treasure to the fort. After Nana’s death (1800) his widow (12th November 1802) took refuge in Lohagad, and Dhondopant refused to hand over the fort to the Peshwa unless Nana’s adherents received certain offices.

Dhondopant remained in command till 1803 when the Peshwa, under General Wellesley’s mediation, agreed to allow Dhondopant to keep the fort on promise of acting as a faithful subject.

Shortly after, from a fort near the Krishna, a garrison of Dhondopant’s fired on the Peshwa and would not allow him to pass to a temple. In punishment for this outrage General Wellesley threatened to storm Lohagad; and on promise of personal safety and of a yearly grant of £120 (Rs. 1200) to Nana’s widow whom General Wellesley described as ‘ very fair and very handsome Well deserving to be the object of a treaty, Dhondopant retired to Thana and the widow to Panvel.

When the fort surrendered to the British it held a prodigious quantity of ammunition of all kinds.

1803:- It was at once restored to the Peshwa and in 1803 (October) when visited by Lord Valentia, was strongly garrisoned, but poorly supplied with stores. Dhondopant’s garrison varied according to circumstances from one to three thousand men. Some months after the outbreak of the final war with the Peshwa (4th March 1818) a strong force under Colonel Prother was sent against Lohagad. On the capture of Visapur the garrison left Lohagad and on the next day it was taken without resistance.

1845:- Till as late as 1845 the fort was garrisoned by a commandant and a few troops. The guard was afterwards removed but, probably because the fort could at any time be commanded from Visapur, the four gateways and other fortifications were left unharmed.

1862:- it was reported as a strong fort, the walls and gates in slight disrepair, with a sufficient supply of water, and able to hold about 500 men. Later in Peshwa time Nana Phadnavis used this fort for living for some time and built several structures in the fort such as a big tank and a step-well.

The fort has been declared as a protected monument by the government.

Lohagad is part of the Western Ghats. It rises to an elevation of 1,033 m (3,389 ft) above sea level, and is located to the southwest of the larger Visapur fort. The range divides the basins of the Indrayani river and Pavana lake. Lohagad overlooks the Pavana reservoir, located to the south of the mountain. The hill extends to the northwest to a fortified spur, called Vinchukata (Scorpion’s tail) because of its resembling shape. The four large gates of Lohagad are still in good condition and reasonably intact.

People can also hike all the way to the fort. Bhaja Caves is on the way to Lohagad if a small diversion is taken. This walk is a particular favorite of trekkers, especially in the monsoon season. It is a simple, very scenic and pleasant trek and the distance from Malavli and Lohagad can be covered in around two hours. A tar road exists all the way to the top from Malavli station and one can hire a tempo or cab to the top. The best season to visit the fort is in the monsoons. It is absolutely safe and many vendors selling onion fritters and lemonade are present by the roadside. One can cut across the hills as well. However it is not recommended to play in the waterfall as there is a risk of slippage and injury. A variety of birds and insects can also be spotted in these hills.

During the monsoon, the top of the fort is covered with mist and clouds and becomes particularly wet with growing moss. The roads and trails leading to the hill are quite slippery at this time of the year and precautions are necessary to be taken while venturing the routes.