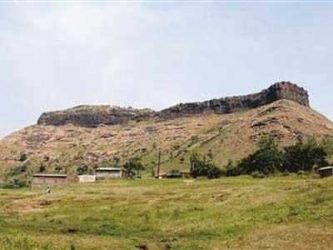 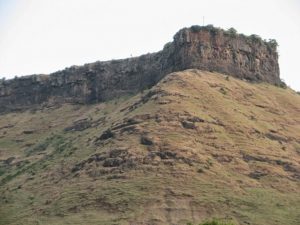 Ramsej or Ramshej Fort is a small fort located 10 kilometres (6.2 mi) north-west of Nashik.  There is a story that Lord Rama stayed for a while on this fort while going to Sri Lanka. This fort can be visited in a day from Nashik. This fort is located on the busy Nashik-Vapi Route.

Ramshej literally means Lord Ram’s bedstead. While in exile, Lord Ram had made this place as his residence for some time, which gives the fort its name. During reign of Sambhaji, Aurangzeb came to Maharashtra with the motive to destroy Hindavi Swarajya completely. Nashik was under the command of Mughals. Since Ramshej is near Nashik, the Mughals thought it would be the easiest to conquer it but proved to be a hard nut to crack.

To conquer this fort Aurangzeb sent Shahbuddin Gaziudin Firozejung with an army of 40,000 soldiers and canons. The Mughals sieged the fort when the fort had only 600 Mavalas. The first attack came from the Mughals to which the Mavalas replied by a massive stone attack. As a result of this attack, the Mughals had to back off.

Afterwards Shahbuddin tightened the siege, dynamited the area and installed wooden platforms to hold the canons and many more ideas followed. The commander of Ramshej fort was an experienced and intelligent strategist and put an end to their daydreams.

Shahbuddin’s obstinate desire to win made him think carefully. “He made a wooden bastion capable enough to accommodate 500 men and 50 canons. Accordingly the surrounding forest was cleared to construct a huge wooden bastion. The Mughals attempted attacks from the bastion, which failed eventually. 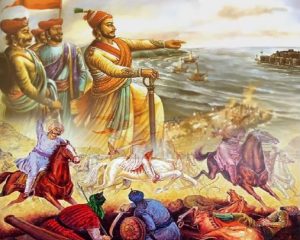 In May 1662, Sambhaji Maharaj sent Rupaji Bhosale and Manaji More with an army of 7000 to break the siege. Shahbuddin checked the advance of Marathas at a place near Ganeshgaon. Both the armies fought fiercely in which the Mughals lost their 500 horses to the Marathas.

This victory filled the Marathas with enthusiasm. But due to this retreat, Aurangzeb got agitated and commanded Bahadur Khan to march towards Ramshej.

Shahbuddin tightened the siege and resumed the attack on the fort, to which Mavalas replied with massive stone attack. Raja DalapatRai got injured in this attack due to which Mughals had to retreat.

Due to consistent failures Shahbuddin left for Junnar calling off the siege. Bahadur Khan took the responsibility of this siege. He devised a new strategy to attack the fort, wherein a part of the Mughal army consisting canons and instruments stationed at one side of the fort to keep the Marathas engaged and the remaining force would attack from the other side. However Marathas somehow became aware of this strategy and divided their army to stations on both sides of the fort, which foiled the plans of the Mughals. 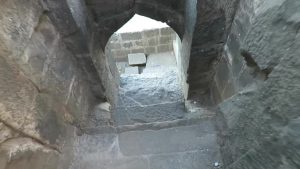 Bahadur Khan called in a Tantrik to devise a new strategy. The Tantrik asked for a golden serpent (snake statue) weighing 100 tola. He claimed to use the serpent and lead the Mughal army to the main gate of the fort. Khan followed his instructions and Tantrik led the army by keeping eye on the fort. When they reached within the range of attack, Marathas started their stone attacks. The Tantrik got hit by a rock and the serpent felt on the ground from his hands. The Mughals were aghast and had to retreat. Aurangzeb got agitated and ordered Bahadur Khan to retreat.

After this Aurangzeb sent Kasimkhan Kiramani to march towards Ramshej, but he too failed to get the fort. Hence, the ferocious Marathas fought bravely for about 65 months and proved how strong their forts are.

The fort is located on a high tableland with escarpments on all the sides.

First we have to reach Nashik. Then board a S.T from Nashik’s CBS bus station to Peth and alight at the Aashewadi Phata. A walk of some minutes takes us to Aashewadi village, from where we can see the fort.

Route to fort goes from the back side of the village by keeping fort at the left side. It takes 1 hour to climb the fort from this route.

Ramshej literally means Lord Ram’s bedstead. It is believed that Lord Rama had made this place as his residence for some time during their exile; hence the fort got its name. To reach Ramshej fort, visitors can take a bus right up to Aashewadi Village, which lies at the foot of the fort. The way to the fort starts from Aashewadi on the south side and it takes 1 hour to reach the top of the fort. En route, there is a small temple of lord Ram inside a huge cave. The cave is well maintained by the devotees and offers a nice place to stay. One cistern lies on south side of this cave, which has potable water. On the left was huge plateau and on the right side there was a tunnel with steps which lead to the main fort. The main entrance was still intact.

The best time to visit the Ramshej Fort is when there is a short dry spell during the monsoons.