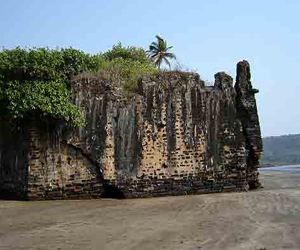 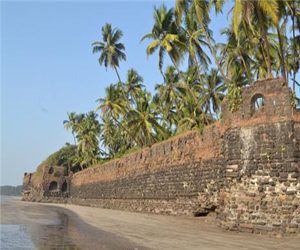 The fort is located at the mouth of the Kundalika River. It is easily accessible by road. The Alibag-Murud road passes through the fort. Earlier the fort was guarded on three sides by creek water. The main entrance is from the southern side.

This fort is an ancient Portuguese fort located at Revdanda in Raigad district of Maharashtra. Revdanda Beach is an isolated beach and is situated near the fort. This beach is still not commercialized, gives an excellent natural view and beauty and one of the best beaches in the in the region.

Revdanda-Chaul (Chenwal in Konkani language) has a history of 2000 years. Chaul (Simul, Champavati were some of its old names) was ruled in the medieval times by kings like Bhoja (12th cen) and Bimbadev (13th cen). Chaul came under Tughluq in the 14th century , the Bahamani sultans in the 15th century, Nizamshahi in 16th century, Portuguese in the 16/17th century (1505 onwards. In 1508, a combined army of Egyptian Mamluks and Gujrat sultanate defeated the Portuguese. The first Portuguese settlements started in 1521 with the permission of Nizamshah), the Marathas in the 18th century and the British in the 19th century.

The Portuguese stoically defended this fort against many invasions namely in 1570-71 and in 1594. It was captured by the marathas (by the Angres, during the time of Nanasaheb Peshwe) in 1740 (An earlier attempt in 1683, during the time of Ch. Sambhajiraje had failed). In 1806 it was ceded to the East India Company and remained in brief control of the Angres in 1817. 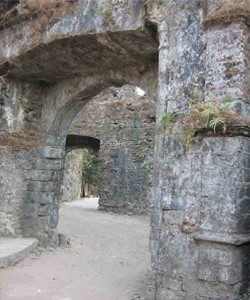 Revdanda Fort is a ruined fort. The periphery of the fort is around 5 km. The entire fortification has two main doors one from north and the other from south. Of which the northern gate was for land connection and the southern gate was used as a passage to the sea. This route opens to the main sea through the Revdanda creek.

Portuguese built a dock over here which had become non-existent over time. The north and south gate is connected directly by a long road made of stones. Now, only the western part of the compound has some relics of the ancient fort. The remaining portion has eventually become the Revdanda village with houses and patches of farmlands.

The fort has a 4 storey tower and a couple of cannons within its walls. There is an old passage beneath the principle walls which is presently blocked. Revdanda had a chapel where St Francis Xaviers delivered one of his earliest sermons in the Indian subcontinent. Revdanda was also the first place in India where Afanasy Nikitin, the first Russian traveller landed. During high tide, the site offers a beautiful view of the palm-fringed ramparts that are touched by waves. It can be reached by 15 minutes’ walk from Revdanda village.

Revdanda Beach is a very isolated beach and is situated near the fort. The sand is black in colour, which gives it a unique look.

By Air:
Mumbai is a nearest airport.
By Rail:
Pen, Kolad , Nagothane is nearest railway station.
By Road:
State transport buses are available from Mumbai and Pune to reach Revdanda.

Best time to visit Revdanda fort is during winter months as the weather is pleasant throughout the day.