Literally meaning the Lion Fort, Sinhagad Fort is one of the most famous historical places to visit in Pune. It was earlier named Kondana and believed to have been built about 2000 years ago. Sinhagad is a hill fortress located at around 36 km southwest of the city of Pune, India. The caves and the carvings in the Kaundinyeshwar temple stand as proofs for the same.

The fort makes a mesmerizing scenery with the Sahyadri mountains and serves an as popular place for outings in Pune. Some notable attractions which you can see inside the fort are Tanaji memorial, the tomb of Rajaram Chhatrapati, a Kali temple, some military stables and a brewery. 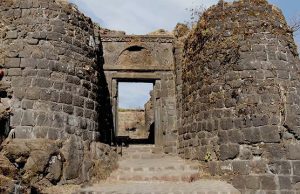 Sinhagad Fort occupies an important place in the history of Pune Previously known as Kondhana, the fort had been the site of many battles, most notably the Battle of Sinhagad in 1670. Perched on an isolated cliff of the Bhuleswar range in the Sahyadri Mountains, the fort is situated on a hill about 760 metres above ground and 1,312 metres above mean sea level. It boasts of a strategic location and is protected by natural frontiers.

The Sinhagad (Lion’s Fort) was strategically built to provide natural protection due to its very steep slopes. The walls and bastions were constructed only at key places. There are two gates to enter the fort, the Kalyan Darwaza and Pune Darwaza which are positioned at the south east and north-east ends respectively. The fort was also strategically located at the centre of a string of other Maratha occupied forts such as Rajgad Fort, Purandar Fort and Torna Fort.

The Sinhgad Fort was initially known as “Kondhana” after the sage Kaundinya. The Kaundinyeshwar temple coupled with the caves and carvings indicate that the fort had probably been built around two thousand years ago. It was seized by Muhammad bin Tughlaq from the Koli king nag naik in 1328 AD.

Shahaji Bhosale, as the commander of Ibrahim Adil Shah I, was entrusted with the control of the Pune region. His son Shivaji, refused to accept the Adilshahi and initiated the task of setting up Swarajya. Shivaji gained control of Kondana in 1647 by convincing Siddi Amber, the Adilshahi Sardar who controlled the fort, that he, the son of Shahaji Bhosale, could manage the fort’s defences optimally. Bapuji Mudgal Deshpande played a key role in this activity. Adil Shah jailed Siddi Amber for this treasonous act and schemed to get it back. He imprisoned Shahaji Bhosale for a concocted crime and informed Shivaji. In 1649, Adil Shah traded the fort for Shahaji’s release. Shivaji Maharaj recaptured it in 1656 again with the help of Bapuji Mudgal Deshpande who convinced the Fort commander by giving land in the newly created Shivapur village and peacefully gained control of the fort.

Through the Treaty of Purandar, the fort passed into the hands of the Mughal army chief “Mirzaraje Jaysingh” in the year 1665.

In 1670, Chhatrapati Shivaji Maharaj reconquered the fort for the third time and the fort came and stayed under the Maratha rule till 1689 A.D.

After the death of Sambhaji, the Mughals regained control of the fort. The Marathas headed by “Sardar Balkawade”, recaptured it in 1693. Chatrapati Rajaram took asylum in this fort during a Mogul raid on Satara but died in the Sinhagad Fort on 3 March, 1700 A.D. 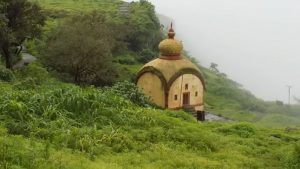 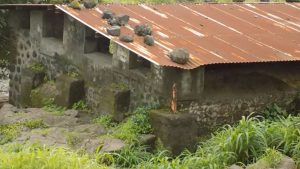 In 1703, Aurangzeb conquered the fort. In 1706, it once again went into the hands of the Maratha’s. Pantaji Shivdev of Sangola, Visaji Chafar and the Pant Pratinidhis played a key role in this battle. The fort remained under the Maratha rule till the year 1818, after which the British conquered it. The British however took 3 months to capture this fort, which was longest it took them to win any fort in Maharashtra.

A water color painting of Pune dating back to the late Peshwa era by British artist, Henry Salt. The picture clearly depicts the towering Sinhagad Fort in the background.

One of the most famous battles on Sinhgad was fought by Tanaji Malusare, a general of Chhatrapati Shivaji of the Maratha Empire in order to recapture the fort on March 1670.

A steep cliff leading to the fort was scaled in the dead of the night with the help of a tamed monitor lizard named “Yashwanti”, colloquially known as a ghorpad. Thereafter, A fierce battle ensued between Tanaji and his men versus the Mughal army headed by “Udaybhan Singh Rathod”, a Rajput sardar who had control of the fort. Tanaji Malusare lost his life, but his brother “Suryaji” took over and captured the Kondana fort, now known as Sinhagad.

There is an anecdote that upon hearing of Tanaji’s death, Chhatrapati Shivaji expressed his remorse with the words, “Gad aala, pan Sinha gela” – “The Fort is conquered, but the Lion was lost”.

According to some the name sinhagad predates this event. A bust of Tanaji Malusare was established on the fort in the memory of his contribution to the battle.

Though ruins are not preserved much. There are few spots which offers scenic view with awesome wind flow. The fort houses a memorial to Tanaji as well as the tomb of Rajaram Chhatrapati. Visitors can see the military stables, a brewery and a temple of goddess Kali (goddess) along with a Hanuman statue to the right side of the temple, as well as the historic gates.

It is around 30 KMs away from main city. It has both trekking route and vehicle route. 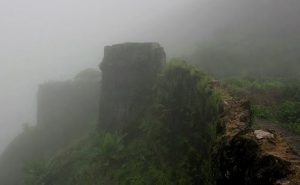 From the top of the fort one can enjoy the majestic view of the mountain valley. The fort also serves as a training center for National Defence Academy, Khadakwasla. One can see the Panshet, Khadakwasla and Varasgaon dams and Torana fort also. The best time to visit the fort is during monsoons.

The months of winter and monsoon season from July to February are the most preferred time to visit this fort.