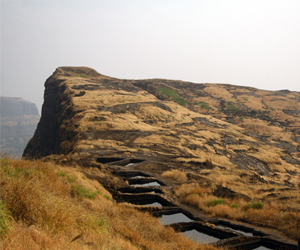 One of the best ways to enjoy an adventurous experience is to go on a trek. Kulang Fort is blessed with scenic beauty and one of the best destination for trekking. Located west of the Kalsubai hill range in Nashik district, this splendid fort is the last fort in the ridge. Among all the forts in the Sahyadri range, Kulang Fort offers the highest and longest climb from the base village of Ambewadi to the top.

The three forts, Alang, Madan and Kulang are some less ventured regions in Sahyadris due to the difficulty caused by heavy rains and confusing pathways that reach out to the fort.

Being in the same region of the three forts its said climb to Kulag is the most difficult. On the way up climbing we come across patches of rock cut steps. It takes 6 hours to reach from Kulanwadi to the fort. On the fort to see around 5 water cisterns. From here we could also see Mahuli with the 3 pinnacles. One can also stay at the caves here. 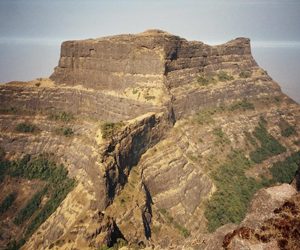 It is presumed that, during the Common Era, kings of the Satavahanas constructed this fort. However, several other rulers captured this fort after demolish of the dynasty.

As per historical records, the fort has been under the reign of the Mughals, the Marathas and later on, the British Army.

In 1760 the fort were probably ceded by the Moghuls to the Peshwa along with many other forts in the Nashik region. In 1818, British forces captured Kulang along with the other nearby forts. The British, however did not destroy the steps of this fort.

Today, the fort is lying in its ruins and has become a weekend destination for trekkers and campers.

The second entrance of Kulang is still in good condition, and we can see fortification as well. When you enter through the entrance, towards right you will see 2-3 small caves. The middle cave is the biggest and it has 2 rooms. These caves are good for stay. 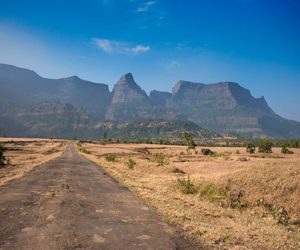 There is 2-3 water tanks near these caves, out of which one has potable water. You will see the remnants of two demolished palaces behind these tanks. The palaces are big enough to accommodate good number of people. To the west of palace you can see a big bastion. From there you can see small hill called “Chotya Kulang” or the smaller Kulang. You can also see the Ghatghar village and reservoir of Wilson dam. At the west side of the entrance there is a group of 10 cisterns. Water here is not potable.

There is a rock carved Shiv Linga here. Going straight for 20 minutes from this place, you will reach near gully, where we can see an architectural wonder. The gully flows along the mountain where the water coming from top is obstructed by a barrier. The water is first stored on the mountain top in tanks, which channel it to the gully and the small weir built.  Water flows out through a “Gomukh”.

Constructor of this beautiful system is unknown. After this you can go to east side where we can see Alang, Madan and Kalsubai. Ratangad to south-west adds to the scenic beauty.

By Air: The nearest airport from Kulang Fort is Mumbai about 140 km away.

By Rail: Nashik has a railway station of its own and is well-connected to all other major cities and towns. Hence, you can catch a direct train to Nashik Junction and then from there, a cab to Kulang Fort. The distance between the fort and the railway station is 55 km.

By Road: Kulang Fort is easily accessible by road. However, you need to trek up the hill to reach its mountaintop.

The region in and around Kulang Fort experiences hot summers and cold winters and hence, the best time to visit is from September to December and February to March.

During this period, the climate is bearable and the surroundings is full of lush greenery. Thereby, producing a pleasant environment. You can also visit Kulang Fort during the monsoon season.